(Aerial rendering of Hawthorne Overcrossing from Bend’s downtown (at left) to midtown (at right). Courtesy of Ashley Vance Engineering and 10 Over Studio.)

For years, Bendites have bemoaned the fact that people who walk, bike, and roll don’t have safe and viable ways to cross 3rd Street. Bend Bikes has consistently advocated to make it easier and safer to move from east to west and back. It was one of the key reasons we supported the $190 Million Transportation GO Bond. For the most important stuff, check out the nitty gritty. For the policy wonks, feel free to keep on reading to the very verbose lengthy end!

The Transportation Bond Oversight Committee will be considering a draft project list and two funding options for the first five years of the GO bond at its next meeting on October 5th from 4 pm – 6 pm. This meeting is one of the pivotal moments for our multimodal transportation future as the TBOC will be discussing which projects should get constructed first! The short story — we want to see the TBOC accelerate and prioritize east-west connectivity. The three key documents are:

These materials are hard to digest in a vacuum without further explanation and they lack context for what happens after these five years or how this plan aligns with the GO bond values of key routes for people who bike and walk, complete corridors, and east-west connectivity. We need more information, but until the TBOC meeting, here are our talking points for public comment to the TBOC:

The TBOC and City Council appreciates hearing from new voices, so if you have been following us but have never submitted public comment, we invite you to do so now! Feel free to use our talking points and make them your own, or draft your own! If you need support in understanding the draft project list better, feel free to reach out to info@bendbikes.org with the small caveat that our entire Board will be at a Board retreat this weekend.

All comments should be sent to tboc@bendoregon.gov or you can provide your comment at the next TBOC meeting on September 28th during one of the public comment periods (4 pm or at 5:50 pm-ish)! Comments supporting a larger bond issuance — if feasible — should also be sent to the City Council at council@bendoregon.gov.

Lately, a lot of attention by City Council and other advocates has brought one midtown crossing to the fore: a Hawthorne overcrossing. At an August 2021 work session before City Councilors, Todd Taylor (Taylor NW), Jim Duffy (Ten Over Studio), John Fischer and Matt Teeter (Ashley Vance Engineering) presented their bold vision for what a cross town greenway (of which the Hawthorne Bridge would be a key component) from Drake Park to Juniper Park could look like.

At the close of Taylor’s pitch, the group presented a high level budget. They estimated $35 Million for the entire project; of that, $12 Million would come from the GO bond. Unfortunately, that would essentially drain a significant funding source for the other midtown crossings on the GO bond’s project list. For perspective, based on what the City’s engineers thought would be the “most likely” allocation of GO bond funds, the draft GO bond project list designates $11.5 Million to Hawthorne and just $250,000 to each of Franklin and Greenwood. Part of what Taylor also guesstimated for the assembled Councilors and City Staff was a rough timeline; if Council approved moving forward in October of this year, he envisioned the overcrossing and greenway would be completed by June 2025.

Bend Bikes fully supports a pedestrian and bicycle bridge that makes it comfortable and easy to get over the Bend Parkway and the railroad at Hawthorne, and we would like to ensure crossing 3rd Street at Franklin and Greenwood are given the full amount of funding they deserve. We also need to make sure the other 3rd Street crossings at Olney and Miller are not left behind at the expense of the Hawthorne overcrossing. With the Wilson Avenue Corridor project already in the works, it’s our contention that Bend needs on-the-ground improvements to those intersections more quickly — they will better connect east and west, all while the overcrossing and greenway is being built. And, when they do cut the ribbon on the Hawthorne Bridge, we’ll end up with a better network of infrastructure for those who walk and bike than if we’d let those corridors take a back seat.

It’s Usually About the Benjamins

How do we ensure there is enough GO bond money to get started sooner than later on the crossings at Franklin, Greenwood, Miller, and Olney while maintaining the community’s excitement and momentum for the Hawthorne overcrossing? One idea is to accelerate the amount of taxes to apply to the Transportation GO Bond. The draft project list also comes with two proposals for financing the projects – one which staff recommends which would have people who own property to $39 per year for the first years of the debt issuance and a larger package that would have folks pay $52. 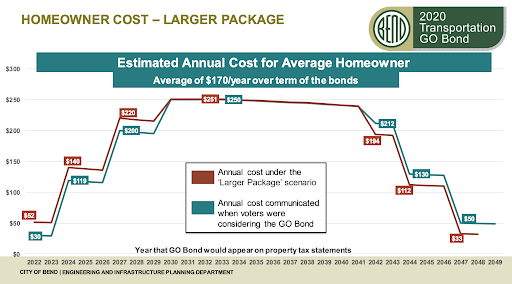 (City of Bend staff’s presentation of a larger financing package.)

From what we can tell (pending any clarification at the TBOC meeting), City staff’s position is that a larger financing package would allow City staff to accelerate the Reed Market Corridor, the Bear Creek Road and 27th Street Improvements, and the Neff Corridor Improvements. One of the key concerns about this larger financing package is staff capacity and resources.

Bend Bikes prides itself on its good relationships with City staff and we do not want to put staff in a position where they are overwhelmed. We need to know more information about what the challenges are for staff as the GO bond contemplated paying for additional engineers to implement these projects.

We are open to getting creative to ensure that City staff don’t burn out on the GO bond projects while still achieving the goal of accelerated and prioritized east-west connectivity. Could projects like the Reed Market Corridor, which require our other cross town connectivity to be effective to absorb the disruption, get deferred to later in the timeline to make room for low hanging fruit like the Olney Pedestrian and Bike Improvements? If the larger financing package is feasible, what other options do we have? While we know it takes more work, we hope the TBOC will explore all of the realistic possibilities to achieve this goal.

If City Councilors feel our economic recovery is such that people who own property could absorb the costs of the larger financing package earlier, then we support options for paying more taxes in the early years of the GO bond. Would property owners be willing to pay $52 per year starting in 2022 as opposed to the staff recommendation of $39 per year? It’s an open question. But we think that prioritizing east-west connectivity for those who walk, bike, and roll is a winning strategy.